When I was in my second year in art school, I discovered video feedback. But it was not with a television and a video camera, it was by accident in a classroom when I activated a webcam on my laptop while I projected a monitor image with a video projector behind me. The image in the image itself made some visual effect, I was surprised by this unexpected effect. I could play with my body and my hand between the camera and projected image, it made some interesting radiation of image with some latency. And I realized that I could move my laptop, I try to move it for the webcam could capture the projected image in the screen frame. The pattern of effect made a kind of vortex to infinity, which was mesmerizing.

After that, I found on the internet that this effect is rather well-known and some artists and musicians use this for their work. I wanted to experiment with this effect too, I tried with different cameras and screens. It was fun, but at a moment, I started to lose interest because I saw almost the same visual effects (also some effects which are already experimented long time ago) and I didn't know what to do with all this.

But one thing that I found interesting with this experiment is that when I film my laptop monitor very closely with a webcam, some interesting pattern has appeared. It was a kind of spot or stain getting bigger in feedback, which is from the size of a pixel of my laptop. And It changes very differently with the position and angle of the camera from the monitor. I thought that I could play with this as a video performance.

There was a little problem, every time image became blue (between blue and cyan), surely from inaccuracy of the white balance of screen and camera. Maybe it's very tiny even invisible, but in feedback, it's amplified and make all video in the same color.

I use a video player "PotPlayer" which is a Korean software quite powerful, I'm using this program to play videos and movies. There are so many utilities in this player, even now I don't know all I can do with this. One day I watched a video with this player, by mistake I pushed a key and it changed the color of the video. It was 'O' key, in Potplayer it augments the hue of the image, and I found that we can make some adjustment of image changing hue, saturation, lightness, etc. in real-time. I put my webcam on this player, I could make video feedback controlling it in real-time.

Finally, instead of the video player, I made a program with Processing that takes the webcam image and shows that after some adjustment. And I add a sound generation (rather noise generation), filtered white noise from analysis of dominating color in the image. So that I could play by image and sound at the same time.

This project was my first live performance work with feedback effect, I could play in real-time. I was holding the webcam in front of the monitor with my right hand, and change the parameters of image adjustment with my left hand. The image was generated by feedback effect, but the interaction between this image (+sound) and me is also feedback. I can't foresee exactly what I can have while performing, I should try something and adapt to what appears on the screen. That was a moment I started work with this method, experiment, and play (as an improvisation) at the same time with a system that generates something that surprises me. 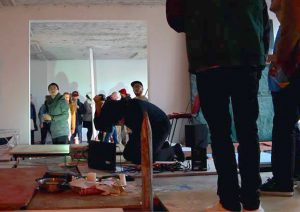 me while a performance in 2016. the video was projected on the ceiling.